When making additional miniatures for Memoir44, my main objective was to make a splendid-looking game even more so, but mainly to do away with the marker shields provided with the game. When I had bought the Italeri sets

things began to get out of hand, because the sets held many more figures than initially thought I needed (and I had bought many more sets than I intended, anyway). So I began to think up new conventions how to use them.

A remark on the "Resistance" (FFI and Partisan) units: I decided not to buy special figures for those units; instead, I use (mainly crouching) figures from the "British Commandos" and "Italian Mountain Troops" sets some of whom wear balaclava caps, berets or hats. The "resistance" and "partisans" appearing in Memoir44 seem to be similar to regular troops- they actually take on regular German troops, so they must have more than rudimentary equipment, training and leadership. Also, partisans have more similarities with commandos than just clothing and using mainly light weapons: They have usually been sucessful if they could achieve a "temporary superiority" in combat and lost out if they engaged in prolonged fights with regular forces. This "temporary superiority" (temporary in time and limited in space) was achieved by surprise, stealth and superior knowledge of the surroundings. Once they allowed the enemy to catch up, things often looked bad for them.
The available "resistance" figures (for example, the Caesar H006 set) simply did not fit the bill for me. And it was an economic decision as well, to be true. Those figures cost an arm and a leg.

Here are my painting and basing rules:

I decided to give all figures a straight colour, with no details highlighted (the target not being "beauties" but game pieces easily distinguished for their function). Also, I did not want to mix hues whenever I decided to paint some more figures, so I looked for available ready-mixed hues. I decided on these brands and colours:

After being painted, all figures were sprayed with a clear, semi-matte protective coating from the spray can. I did not use primer. Painting was done after basing (see below).

For playing, I adopted a proposal made in the Memoir44 forum to replace just one figure of the unit by my home-made "special function" figure; the other figures come from the standard game. Obviously, when the unit takes losses, the "special" figure is the last to go.

Bases and Base Colours

All special units get round bases to set them off from the square-based units that came with the game. As bases, I used 17-mm-chips I got very cheap from "Adam Spielt" and used "UHU plus endfest 300" 2-component glue to fix the figures on the bases. I cleaned bases and figures with spirit (ethyl alcohol) after roughing both contact surfaces with 240-grain sandpaper, and they seem to hold on to the bases rather determinedly.
"Generic" special forces get a base painted in the colour of the unit. Other special units colours as noted in the table below. The base colours were mainly decided by the mix of chips I had available, though black and red happen to be the NATO badge colours of engineers and artillery.

Here is a collection of pictures I took; I switched cameras in the middle of the work, this explains the very variable picture quality.
Besides making miniatures for certain special units I painted the sandbag fortifications and wire and hedgehog obstacles to make them look better.

First, a general impression of a (fictional) battlefield. Note how the coloured bases make it easy to find the "specials" at a glance:

Now for some close-ups:

Here a US special unit, accompanied by a heroic leader, attacks a German unit that hides behind wire and sandbags. (Note the fresh, silvery wire- Rommel must very recently have visited this section of the beach.) 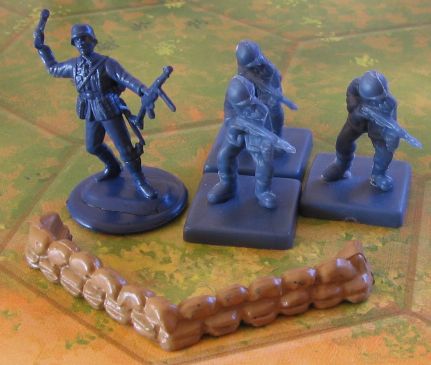 This fortification is defended by German special forces, designated by the round base in unit colour. The fact that this soldier throws a hand grenade has no significance. Note that he carries a spare grenade in his left boot.

The beach is also defended by artillery; shown here is a standard, 2-gun artillery unit and one "big guns" unit. The radio operator has the same function as the "big guns" shield, it does not mean that this unit has 3 guns. 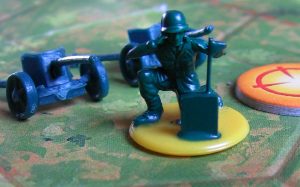 The US artillery observer/big gun marker is the only figure I did fiddle with. Originally, this was a mortar loader, but some hot steam helped him to get his left fingers out of his ear, and a bit of wood and wire make a simple radio. 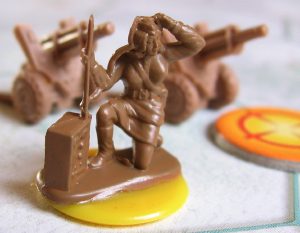 And here we have some Russian Big, uh... Guns, I suppose. The fact that Russia used female radion personnel is historical. 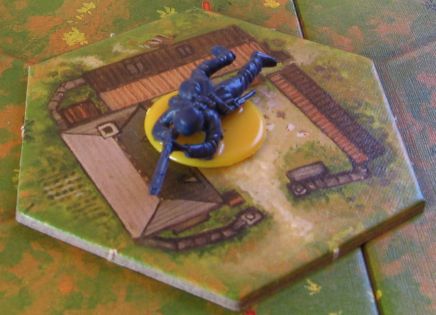 In the town a German sniper waits for the US troops to come into range. 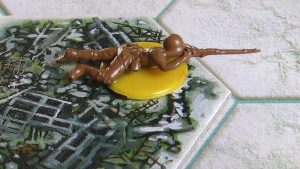 Meanwhile, his Russian colleague defends some frozen rubble on the East front. 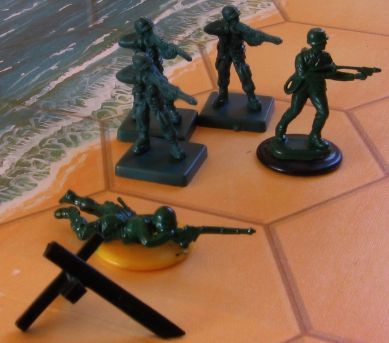 Here are US engineers (note the black base- this figure carries a flamethrower), advancing across the beach. A US sniper provides fire cover. 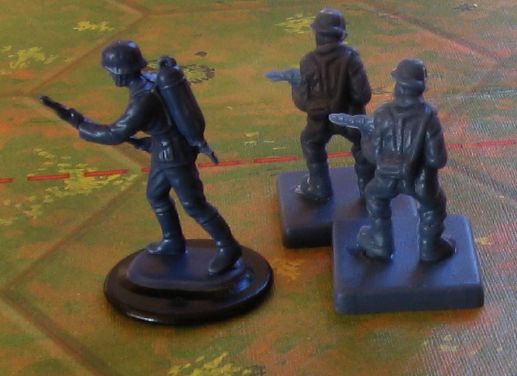 Here are their German counterparts- an engineer squad, also designated by the black base and the flamethrower. Note the details of the figure (from the Italeri "German Infantry" set). 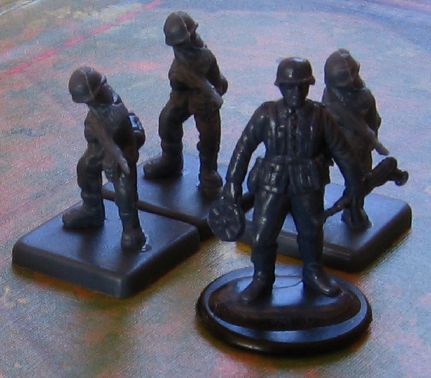 These are the other German engineers, designated by the mine-carrying soldier. Of course, the game's rules do not distinguish between different types of engineers, but this might be something for a house rule. 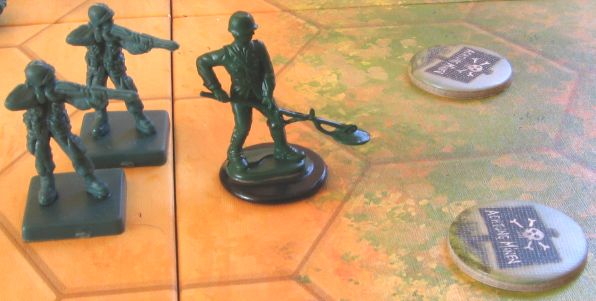 Again, their US counterpart. This should be enough on the topic of engineers, I believe. 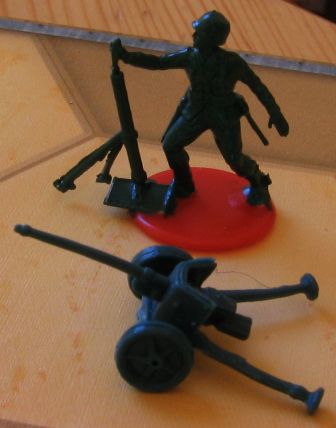 Here is a US artillery unit. A mortar seems more approprite than an anti-tank gun for a unit that just hit the beach, but actually the figure makes no difference on how the unit operates. However, it looks nice I think.

A German tank unit, led by a heroic leader, encounters a US anti-tank infantry unit. Whether this is particularly dangerous for the Germans depends on the house rule that might be in force for the a/t infantry, otherwise this would count as a generic special forces unit for the US player. 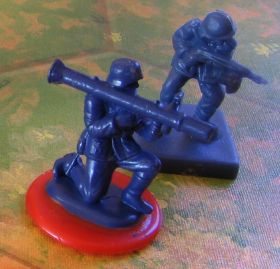 This is a German anti-tank unit. Again, note how detailed the figure is sculpted. Italeri makes really good miniatures! 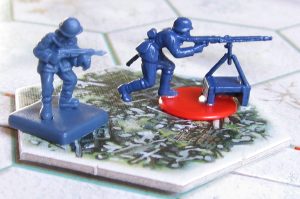 This is a German MG unit, presumably in the ruins of Stalingrad or another inhospitable Russian town.

Their US counterpart- I have 2 different figure types for them.

Now for some resistance fighters. As noted above, the figures are actually supposed to be British commandos, but I think they serve the purpose well (remember, for me a purple base designates "irregular" units), especially when accompanied by a heroic leader with a beret. 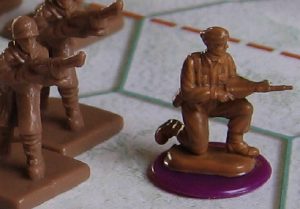 And a Russian (Yugoslavian?) partisan unit. 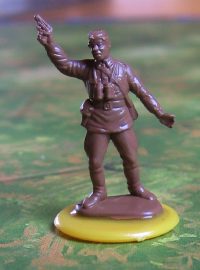 And while we are looking eastward: Here is a Russian heroic leader. Or maybe it is an excited Commissar? 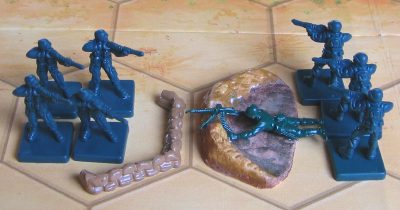 Now some pictures of units in cover (i.e. behind sandbags). Both units are, for game purposes, identical, but one of them looks better. Guess which?
The cover terrain is made from salt dough (50% flour, 50% salt, a few drops of water), coloured with water colours from an old children's paintbox, and sprayed over with protective enamel. 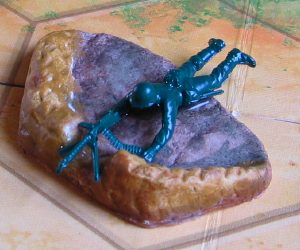 A closer look at the unit in cover... 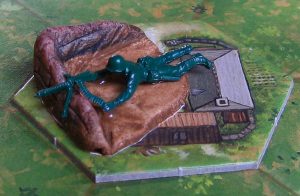 ...and another US unit defending a farm. Note that the picture shows a unit close to exteinction, i.e. having only one figure left. If the unit is bigger, standard figures would be used.
Note that this is a standard infantry unit, despite the MG the figure sports. To qualifay for a special unit in my book, the figure would have to have a red base. 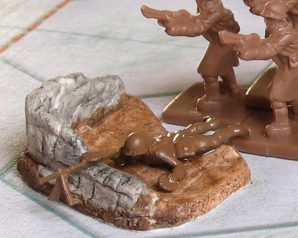 And again, a look at the East front: A full-strength russian unit in "sandbag" cover. 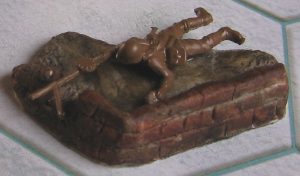 And finally, another Russian unit hiding behing ruin walls. By the way, if you need some rationale why the rules say that a unit leaving sandbags "destroys" the cover, this picture gives it. If someone occupies this "cover", he gets a lane of fire back to where he came from, which is not particularly useful, is it?

More to follow, I am certain. Many more figures are awaiting the application of the brush...