The scenario was only playtested solitaire. I would be interested in reports about game balance, problems during play, rule problems etc. See Designer's Notes for revision information. 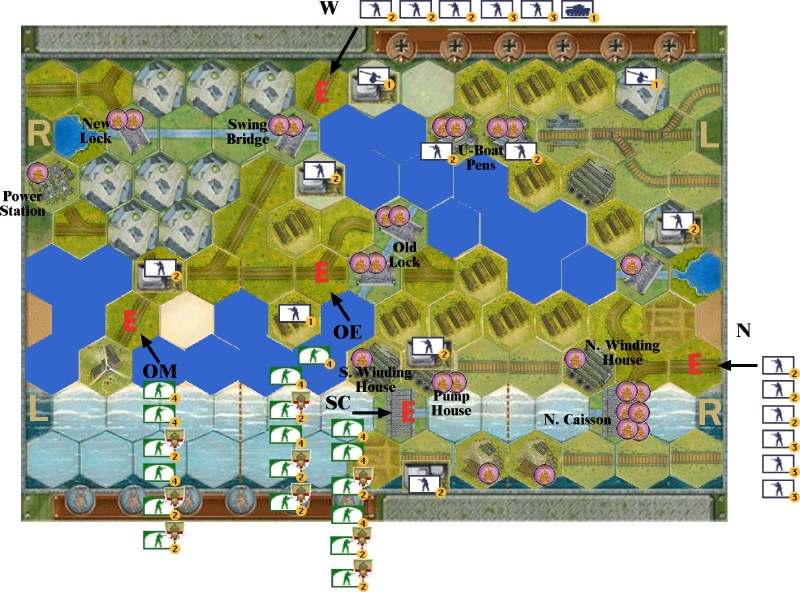 There is a problem with this scenario: It can not be set up with the terrain tiles provided in the game and its expansions. For more information please see the set-up section, below. Also, not enough "Royal Engineer" shields are provided in the game; please use alternative shield tokens (or other figures, if you have) of your choice for the demolition squad units.

1941 the Royal Navy had sunk the German battleship "Bismarck"- but just in time before the damaged ship could reach Saint-Nazaire, at the mouth of the Loire in Southern Brittany, for repairs. The "Forme-Ecluse Louis Joubert", also known as the "Normandie Dock", was the only dry dock on the German-occupied Atlantic coast big enough to repair a ship like this. The British knew that the sister ship of "Bismarck", the "Tirpitz", was still in Norwegian waters and getting ready to sail. What if the Normandie Dock could be destroyed- wouldn't this cause the Germans to give it a second thought before bringing "Tirpitz" into the Atlantic, without a chance to repair her in case of serious damage? A commando operation was planned to achieve just this. The plan was to ram the dock gate with a destroyer packed with explosives, to be ignited by a time-fuse. To make sure, demolition squads would blow up the dock machinery like pumps and winding gear. And while they were there, additional commandos could try and destroy other locks and bridges, plus targets of opportunity.
The plan said that, task accomplished, the boats would take the destroyer's crew and the commandos back to England.

On March 26th, 1942, the motley flotilla of motor launches, torpedo boats and the destroyer Campbeltown left Falmouth - 19 ships and 600 men, plus escort ships. At 01:34 on the 28th the Campeltown struck the dock, and the motor launches began to disembark the commandos. It is at this point that the scenario begins.

Tile replacement suggestion: The blue all-water areas can be simulated by any water tiles. However, the board looks a lot better if you cut the areas from blue cardboard to cover the board's original terrain: Assemble a few tiles on the cardboard in the desired shape, mark the outline with a pencil, and cut it out.
The set-up uses far more barrack hexes than provided with the game. Since no special rules are in effect for "building" areas (all town, barracks, station, factory and power plant tiles are treated as "town/village" tiles for game purposes), replace missing tiles with any tile that suggests a built area.
The two fortress hexes represent the massive U-Boat pens, then still under construction. They follow the standard Terrain Pack rules for fortresses.

Of course you can, as I did, simply use the VASSAL M44 module to play (this is a slightly modified version of the original module by Stan and Carl Hilinski and Bill Bennett). You will find the scenario in the File/Scenarios/Extra Scenarios menu of the module.

Bridges represent swing bridges, lock gates and the two "caissons", the massive gates of the Normandie dock. They count as open terrain.

Queued Entry: All British and many German units enter the game from queues formed at certain entry points. This represents the fact that the British units had to disembark, one by one, at relativley crowded landing places, and that the Germans had to be alerted and brought in from the garrison quarters.
The British entry queues are at the "Old Mole" (OM), "Old Entrance" (OE) and "Southern Caisson" (SC). The German entry queues are on roads in the "North" (N) and "West" (W). Each queue is considered to be in the board section its entry hex (labelled "E") belongs to.
The German player must use the queues as arranged in the set-up image above. The British player is allowed to re-arrange the units in each queue once before the game starts, but he may not move units from one queue to another.

An order can only be given to the one unit that is at the head of each queue when the player's turn starts. Implicitly, this means that only one unit per queue may act in one player turn.

The orders that can be given to a unit at the head of a queue are restricted:

The British player plays with 5 cards and has the first turn.

The German player starts the game with 2 cards. A the end of the turn the German tank enters, he draws 2 replacement cards and then plays with 3 cards for the rest of the game (even if the armor unit is eliminated later).

No victory points are awarded to either side for unit elimination.

The game can be played competitively in two ways:

The following Tactics Cards have special functions or need commenting:

All-water and Ocean hexes may never be entered, except by the "British Withdrawal" rule (see below).

All British units (including the demolition squads, see below) are special forces (commandos); they may move 1 or 2 hexes and still battle. In addition, they are not compelled to stop when entering a town/village hex (this reflects their thorough training and terrain studies), but they still may not battle from a town hex just entered.

British units marked as engineers are commando demolition squads, specially equipped and trained to demolish dock facilities, but only very lightly armed. They are treated like all other British units except that they fire at 2-1-0 only.

Eliminated German infantry units come back into play as full-strength (4) units at the end of one of the German entry queues, so the German player will never run out of units. To decide which queue a unit goes to, roll a die or toss a coin: "Even" or "Head" means that the unit will enter again from the West, otherwise it lines up to re-enter from the North. The unit must re-enter play by the queueing rules described in the set-up section above.

German Artillery units may not move (they represent flak guns on rooftops), but fire normally.
In addition, they may fire with "1" strength at any open ground hex on the board. Open ground includes any hex that is not built terrain (e.g. high ground, beaches, roads, rails and bridges/lock gates/caissons, even if a bunker is in the hex). They can not hit units waiting in queues because these are, in the sense of this game, not yet "on the board".
The artillery next to the German entry point "W" represents a flak position on top of "le frigo", a cold storage situated in otherwise open ground. Contrary to normal rules, German units (only) may pass through this hex, but may not stop their movement in it.

All German units retreat normally, towards the "Western" board edge.

British Withdrawal: The British player may, at any time, withdraw units to save them and gain withdrawal victory points (see "Conditions of Victory", above). Withdrawal is possible in two ways:

A withdrawal can not be used as, or instead of, a retreat. A withdrawn unit can not enter the game again.

The scale of this scenario is about 70 metres per hex. One unit figure represents about 5 men. Here is an impression of how the map is overlayed on a contemporary map of the town: 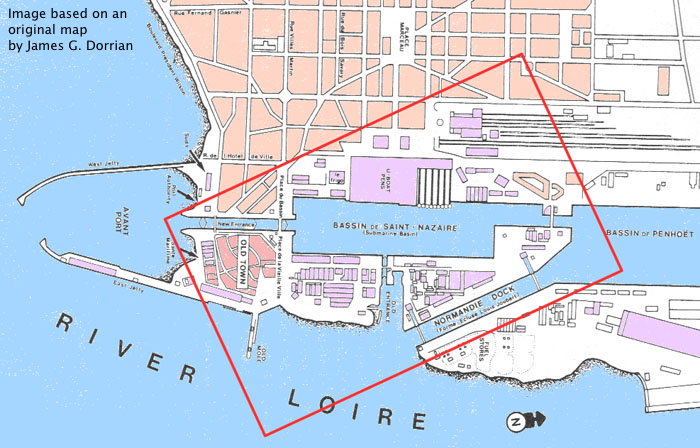 The roads pointing to the South side are meant to lead to the jetties that embrace the "avant port", the sheltered roads to the "New Entrance" lock.

The German armor unit represents the first armored cars to arrive in the harbour area and the moment the Germans re-gained some of the initiative, hence the increase of the german card hand. Incidentially, this also marks the point where the historical operation had definitely gone askew- if raiders lose surprise and initiative and have to slug it out against regular forces, you can assume that their plan has been too ambitious, or that intelligence was bad.