The scenario was only playtested solitaire. I would be interested in reports about game balance, problems during play, rule problems etc. See Designer's Notes for revision information and additional material. 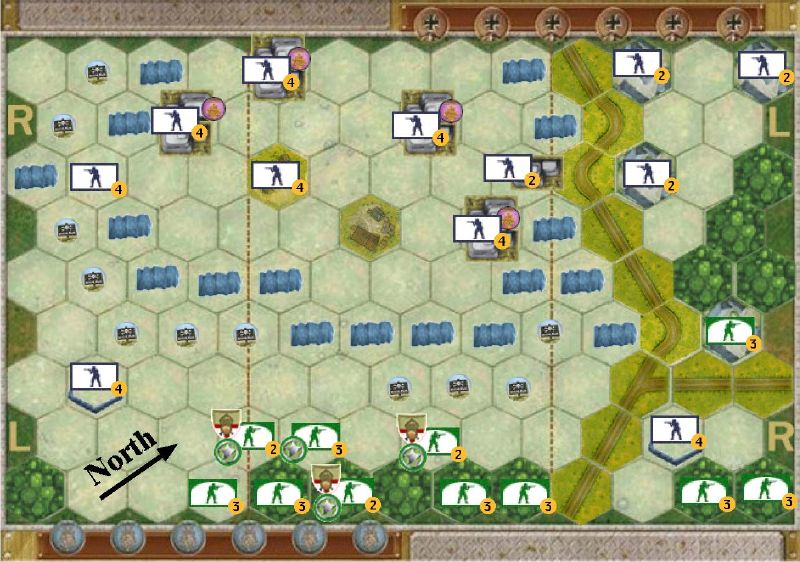 There is a problem with this scenario: Bring your own wire! We need 17 wire markers, but only12 are provided in the game. Use tokens of your choice to designate five additional wire hexes.

The German battery in Merville, Normandy, was one of the hazards for the eastern landing areas of the D-Day invasion. Its 150-mm-guns would be able to fire at landing craft and landed troops and cause heavy casualties. The battery had been extensively attacked from the air, but even direct hits were not able to penetrate the 2-metre-thick concrete casemates. As part of Operation Tonga 650 men of the 6th Airborne Division, mainly from Lieutenant-Colonel Terence Otway's 9th Battallion, were to launch an attack against this battery. They were limited in time, because if no success signal was coming from them, one hour after the planned time of occupation heavy shelling from the battleship HMS Arethusa would begin.

Otway had planned and trained for the attack meticilously and resourcefully. The paratroops would be preceded by a heavy bombing attack, pathfinders and reconnaissance teams would prepare the landing zones and the attack of eleven groups with specific tasks each, and finally, at 02:30, immediately preceding the attack, 3 gliders would crash into the battery area itself and attack from the inside with flamethrowers and machine pistols. A diversionary attack was to be made on the main gate, while at the same time the main thrust was to be delivered from the south-east.

The plan came apart completely due to navigational errors, anti-aircraft fire and low cloud. The force was scattered over more than 50 square miles, and the bombing raid had missind the battery completely, instead bombing part of the paratroopers' landing zones, bombs actually falling through the groups of men as they dangled from their parachutes and exploding below them. By 02:50 only about 150 men were available for the attack, missing nearly all their heavy and specialized equipment. On the positive, the reconnaissance party under Major Smith had done excellent work, marked pathes through the minefields and been close enough inside the defences to hear German sentries talk. By 04:30 the attack was re-organized into 4 attack groups plus a smaller group under Sergeant Knight that was to attack the main gate.

It is at this point that the scenario begins.

The bunkers (field bunkers, in the image above marked with double bunker images for optical purposes) marked with VC tokens represent the gun casemates. The bunker near the road is the main entrance to the battery area. The sandbagged positions outside the wired enclosure are MG positions.

You can also play this using the VASSAL M44 module to play (this is a slightly modified version of the original module by Stan and Carl Hilinski and Bill Bennett). You will find the scenario in the File/Scenarios/Extra Scenarios menu of the module.

The British player plays with 5 cards and has the first turn.

The German player plays with 4 cards.

To win, the German player must have accumulated at least 7 VP and have more VP than the British player at the end of any game round.

The British player wins by denying German victory conditions. He also wins immediately if he has eliminated all German units or has destroyed all four gun positions.

The game ends when either player achieves his victory conditions.

Game Balance Proposal: The secenario seemed balanced when played solitaire. However, playing with a "real" 4-card-hand may give some advantage to the Germans that is hard to counter. If you think the German side is favoured, try playing the German side with a 3-card-hand.

The gun casemates (as by the standard rules for field bunkers) give their defensive benefit to both sides. The main gate bunker is a normal bunker and gives its benefit only to the German side.

All British units (including the engineers) are elite troops (airborne infantry); they may move 1 or 2 hexes and still battle.

British units marked as engineers are, at game start, equipped with "bangalore torpedos", i.e. with special explosive charges designed to destroy minefields and wire; the Battle Star token on the unit marks the possession of such charges. In addition to their normal special capabilities as engineers and elite troops, such units may battle and remove a minefield or wire not only from the hex itself but also from an adjacent hex; this expends the charges they have, and the token is removed, i.e. each unit has only one such special attack. Engineers may not advance into a minefield or wire hex they successfully attacked; of course, they may use a second move given by a Tactics Card to go there.
A unit that has used its "bangalore torpedo" continues play as an elite combat engineer unit. If a unit is eliminated, its "bangalore torpedos" are also lost. The tokens may not be passed on to other units under any circumstances.

Gun demolition: To destroy the guns in a bunker, a British unit must be in the bunker hex and must battle against the guns. This is a normal battle action and destroys the guns automatically. When the guns are destroyed, the VC token is granted to the British.
The unit does not suffer any damage from the demolition attack. The bunker retains its normal function.

I am aware that a Merville scenario already exists (Scenarios from the Front, #1342U) but this seemed a bit "bland" to me. A scenario based on this historical attack should, in my opinion, include these key factors:

On the other hand, the guns themselves, though being the objective of the attack, did not play any role in the defence and thus should not be present on the board.

I was also tempted to build a time factor into the scenario, but M44 does not lend itself very much to that. Attempts to limit the game to "one play through the deck" or something similar only added to the luck factor when I experimented with it, so I decided to couple the victory conditions to an objective-based modification (neutralizing German VP by VCs won) that should be enough to give the British player an incentive to play agressively.

The scale of this scenario is about 60 metres per hex. One unit figure represents about 5 men. Here is an impression of how the map is overlayed on an aerial photo and a map of the battery:

You may also want to take a look at the original of the photo and at another aerial photo showing the battery in smaller scale. The Merville battery is now a D-Day memorial site with a museum.
Note: The outer wire (in some sources described as a "cattle fence") was by far weaker than the inner and ring thus was omitted from the scenario set-up.

Here is a panorama of the battery site as it looks today...

...and a photo of one of the massive gun casemates (both photos copied from this website): 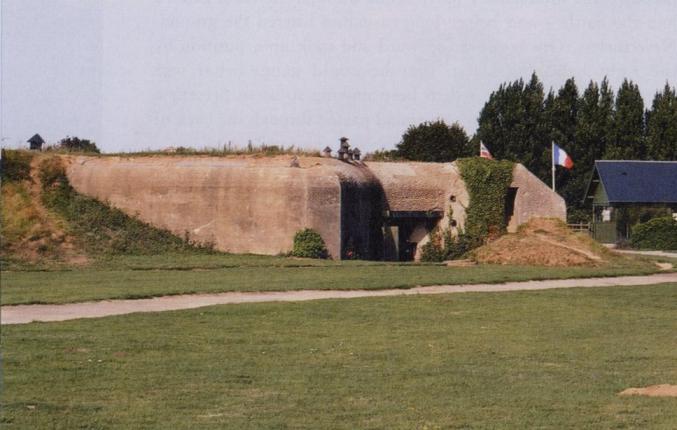 More maps and images can be seen on the web sites referenced below.