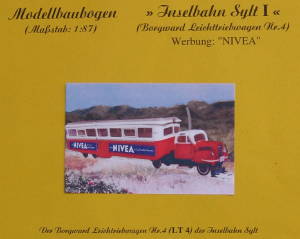 There are two versions of this model set, differing only in the deals provided (I = LT4, Nivea decals, II = Beck's Bier decals). The Nivea (in Luft und Sonne, "in the light and sun" sun lotion) and Beck's Bier (löscht Männerdurst, Beck's beer "quenches men's thirst") advertisements are among the most frequent advertisements actually used at the time and are well-known to anyone who ever visited German seaside resorts.

Here are postcard images of what the actual train looked like: 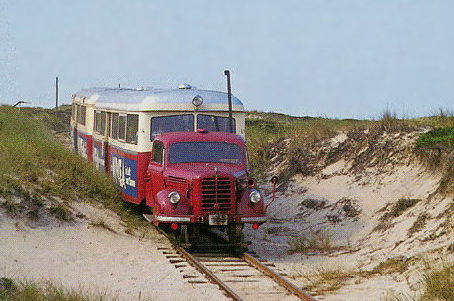 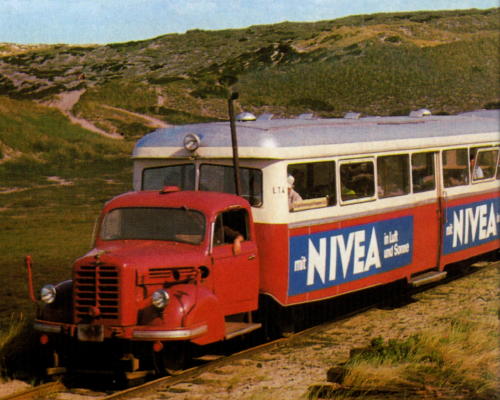 (Click image to show it in large size in a new window.)

Nothing special, just the usual note of "understand the model before you cut or glue anything". Parts fit well, the instructions are ok, though diagrams might have been more clear than the black-and-white photos provided. I replaced the exhaust pipe with a painted piece of toothpick, and used a toothpick tip for the signal horn because forming very small pipes and cones from cardboard drives me mad.

The cardboard is of lesser quality (tending to break at score lines), and the print is not really crisp. Also, part of the drawing (glue tabs) seems to be hand-drawn pencil which strengthens the overall appearance of a job done not quite professionally; another indicator is the thin paper used for the seats and the thick cardboard used for decals. The combination of coloured cardboard and low print quality also does not give a convincing effect of a varnished surface. All of this is a pity, because this seems to be the only model of this particular piece of railway history.

The base is not part of the model, I added it because I thought the model would look better with some background.

Sylt is Germany's northernmost island, and it had a narrow-gauge (1000 mm) island train line from 1888 to 1970. Because of the sandy and shifting terrain the the trains needed to be light and able to cope with narrow curves. After World War II the damaged tracks were repaired, and on October 5, 1952 the railway resumed operations. The post-war trains were designed and built in the train company's own shop in Westerland, the main and central town on Sylt, converting used Borgward diesel trucks into tractor-trailer-style power-cars that could tow one additional car if necessary. The construction was dubbed "Borgward Leichttriebwagen" (Borgward light power car); five of these vehicles were built (serial numbers LT1 to LT5, 90 hp, 14.4 metres long) and remained in operation, along with a few other tram-style power cars, until the privately-owned railway was finally closed down in December 1970. By that time the island roads had been repaired and re-routed to fit modern requirements, and the railway had become obsolete. One single power car (LT4) survived in the Hanover Tram Museum. The tracks are now replaced by bicycle lanes, winding through the dunes where a railway ran some years ago.
The trains had a beige finish, set off with varying colours like red, light green, dark green, blue and brown. In the last years of operation advertisements were added to the trailers; the main group of passengers were tourists, so the advertisements were mostly for sun-tan lotion and beer.

The island railway had two lines, a southern line running from Westerland to Hörnum and a northern line connecting Westerland to Germany's northernmost town, List, at that time a small town with some fishing industry and a German Navy garrison, including an officers' school and an air-land shooting range. The central station in Westerland was near (but no connected to) the German Bundesbahn trunk line terminal. The Bundesbahn (federal railway) connects Westerland to the main land via an artificial dam (Hindenburgdamm) since 1927. With the exception of ferries, that railway was, and still is, Sylt's only connection to the coast; cars had to load and unload in Niebüll (Schleswig-Holstein) to be transferred to Sylt (for a time, this limited the number of cars on Sylt, but, well, times changed).
The island train operation was plain and simple. At the terminal stations the driver reversed the train by turning the tractor-trailer unit on a manually operated turntable, unhooking and hooking up other cars if necessary. The Westerland station was a nice, if small, red-brick affair, the Hörnum and List stations were small red-brick hoauses, and the intermediate stations usually featured just a sign and a hut the size of a large telephone booth and had mysterious, enticing names like Puan Klent, Klappholttal, Vogelkoje and Blidsel. Each tractor had brushes mounted in front of the front wheels to brush sand off the tracks, a necessary precaution on an island famous for its large "wandering" sand dunes.

I have seen and used the trains in operation during the annual holidays I spent in List with my parents from 1960 to the mid-1970s, and I loved the island railway that usually went by its nickname "Rasende Emma" ("Dashing Emma", Emma being a synonym for seagulls derived from a Christian Morgenstern poem that begins "Die Möwen sehen alle aus, als ob sie Emma hießen...", all seagulls look as if their name was Emma). Childhood memories of summer and sun and sand and the sea are connected to it, and the smell of sun-tan lotion mingles with that of hot seat upholstery (the latter of of the beach bus, the railway had wooden seats). For me, List will always be the small town with concrete-slab roads, a small harbour with trawlers and the "Hindenburg" lifeboat, red-brick thatched-roof houses and a cinema in a wooden barrack- and, of course, with the Inselbahn station and the turntable next to some sheds and a general air of not having arrived in modern times. Today, List looks very different, which is probably good for the town and the tourists, but its current look cannot beat my childhood memories. It is good to see that part of these memories now survives in the form of a paper model.