The model shows the church "Santa Maria del Naranco"; the name is taken from Monte Naranco near the town of Oviedo in North-West Spain on whose Southern slope the church was built in 848, i.e. in the 9th century. The original building is about 20 by 6 metres in size. In the historical reference section of this page you can read more about its history and also see what the actual building looks like. For starters, here is a beautiful interactive panoramic view (Flash player needed): 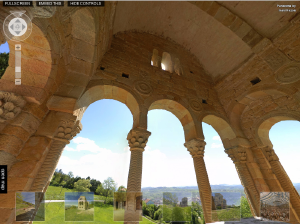 I bought this model because the description in a web shop appealed to me. It said "very beautiful colouring", I think, and that is certainly true. The artists have achieved a near-photorealistic effect with what I believe are aquarell colours. The graphics are wonderful indeed. Strangely, the contour lines of the parts are often printed in rough, absurdly wide lines (some of them more than 1mm wide), and some not even really straight (says my ruler). However, it is usually easy to find the correct cutting or scoring line, so fitting the parts is not a problem, and the overall graphic impression is magnificent. If you compare the model with the pictures of the original building you will appreciate how well the artists captured the details.
The designers are given as "Fiquin y Badiqui"; this seems to be their only cardboard model that is easily available. Behind these pen names is a couple of artists and illustrators who lived in Oviedo, Asturias. In 2009 the sad news reached me that the wife, Badiqui, had died and that Fiquin has moved into the country.
Fiquin y Badiqui are no professional model designers, which explains that the construction that is sometimes unusual, done in what you might call "origami-3D-puzzle-style", but please do not read this as criticism: The result of their efforts is one of the most enjoyable models I ever built. But if you are going to build it please be aware that it requires some thinking to do it right, and some decisions where to deviate from the printed instructions. Some parts of the edition I have are outright wrong, in particular when it comes to the northern staircase annexe.

The model is printed on glossy cardboard that is heavy and what feels to have a "flowing" quality, somewhat similar to vinyl sheets. It can be cut very easily and precisely and also is easy to form, but offers some resistance to precise folding. However, once folded or formed, it keeps the form very well indeed. Colouring white space with aquarell colours was no problem at all.
The model comes without a printed base and actually this is one of the models where the base would hide details that you may want to see later. I added a "KAPA" cardboard-foam sandwich board as the base, with cut-out holes so that the ground floor interior of the model can still be seen. The model also shows some whitespace along the bottom, indicating how the building is set into the sloping ground of Monte Naranco.

More about the model in the Hints and Translation section, below; first take a look at some pictures of the model; the pictures show the progress of the construction as well as the end result.

(Click image to show it in large size in a new window.)

The following hints may help if you, in particular if do not speak Spanish (like me) and consequently have difficulties (as I had) reading the instructions:

The following text is an abbreviated rendering of the historical overview that comes with the model:

The "Moors", Muslim invaders from North Africa, invaded the Iberian peninsula in 711. Some Visigoths managed to maintain Christian kingdoms in the mountains of Northern Spain and sometimes even to beat the Islamic forces. In the rough terrain they could call their own they founded the kingdom of Asturias that covered what we now call Galicia, Asturias and Calabria. Among other towns, Oviedo was twice the capital of that kingdom; it was the seat of king Alfonso III who expanded the kingdom in the 9th century to the river Duero. His son, Ordono II, moved the capital to Leon, and the kingdom became known as Asturleonés from then on.

The kingdom left only a few churches and public buildings that are in a good state by today. One of them is the church Santa Maria del Naranco, built on the Southern slope of Mount Naranco, above the old capital Oviedo. It was built around 848 on orders of Ramiro I and once formed part of a greater palacial complex of which it and the nearby church of San Miguel de Lillo are the only surviving structures. The church was initially built for secular purposes, probably as the seat of the royal council, and only at Ramiro's death was consecrated and transformed into a church.

Here are some impressions of what the building looks like today: 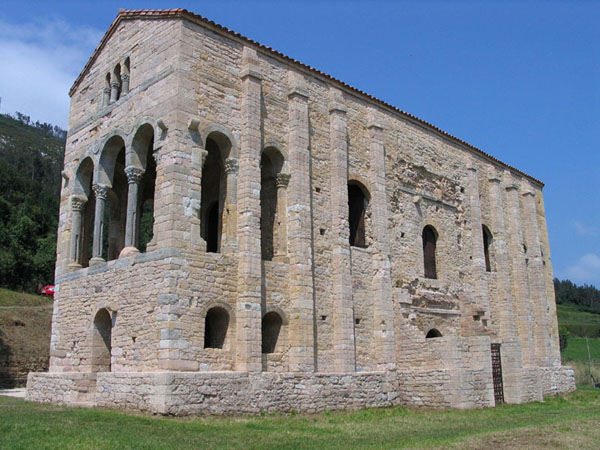 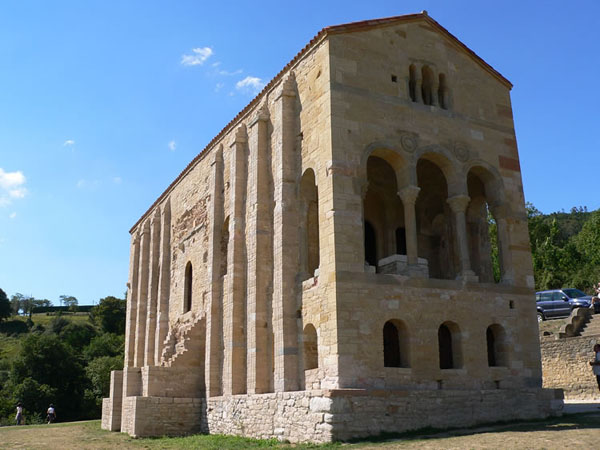 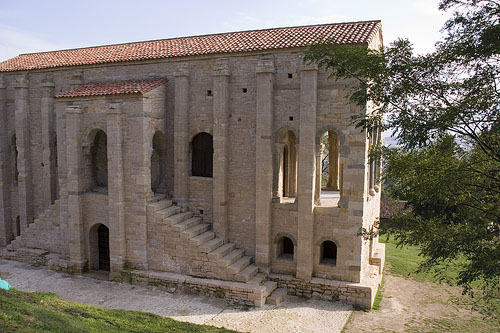 The long Northern facade with the stairs to the first floor 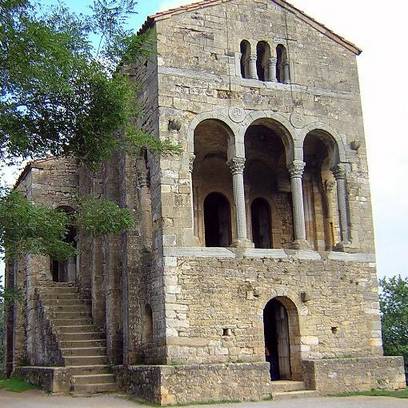 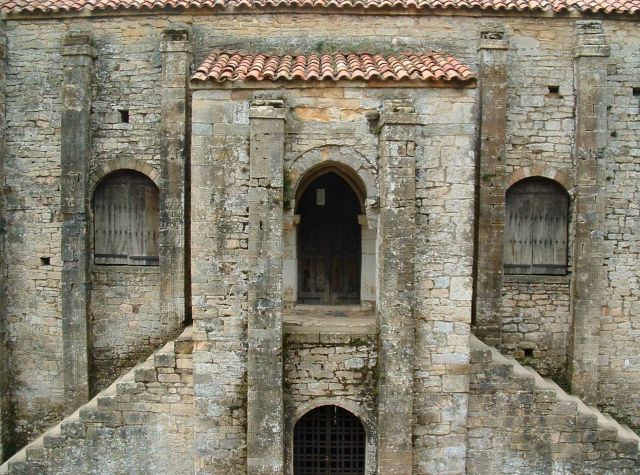 Close-up of the Northern facade and stairs 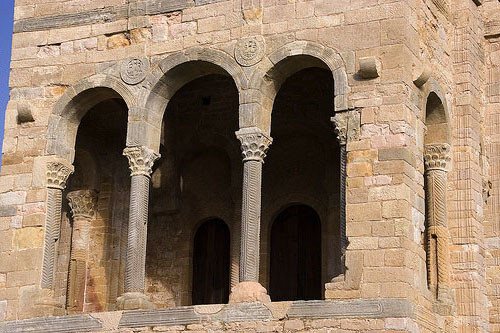 The Western "mirador" in detail 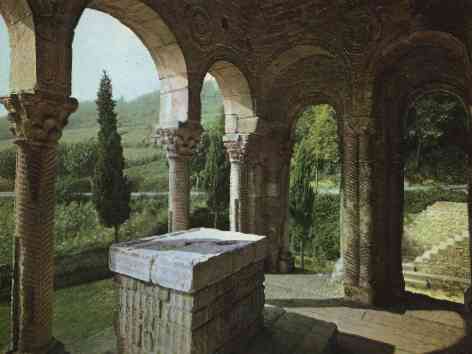 And finally, some web links about Santa Maria del Naranco: