A Day in Saint-Nazaire

In September 2002 I had the chance to spend one day in Saint-Nazaire. My main interest was to see the places over which the British commandos fought on March 28th, 1942, in the raid known as "Operation Chariot". I had read a lot about it, and I have often played the game "Raid on St. Nazaire", so I was curious to see the place for myself.
I am glad I have been there.

Update: In 2013 I attended the remembrance ceremony and took some walks around the town and along the coast. You can read about that here and here.

Update: I have revisited the site in 2017, for the 75th anniversary of the raid. Here is my report about that. There is also a short forum entry about it on the boardgamegeek.com pages.

Remark: The images on this page are in reduced size. To see the original image, click the picture; the enlarged image will open in a new window.
The highlighted numbers in the text refer to the area numbers on the Raid on Saint-Nazaire game board (see the image hosted on BGG). It was this game that has started my interest in Saint-Nazaire. For more photos and historical information see the website of the Saint Nazaire Society and the Combined Ops website. 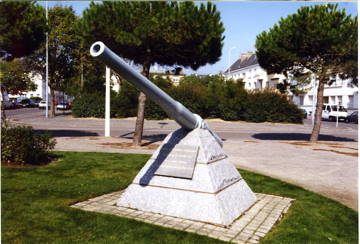 H.M.S. Campbeltown's 12-pounder, part of the Operation Chariot memorial located at 409, with a view along Rue V. Auriol (420/437). This gun was propelled a few hundred metres by the explosion of Campbeltown on the morning of March 28, 1942, and was found in the harbour basin years later. If you look along the barrel, you can see that it has been slightly bent by the explosion. 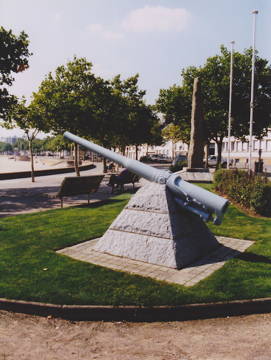 Another photo of Campbeltown's 12-pounder, this time with a view to the beach that lies to the left of 408. The beach is a fine place to take a swim or to sunbathe, very near the town centre. In the water, to the west and close to the beach, there is a memorial for the US soldiers who took part in the expedition to help France and Britain in the Great War (WW I). 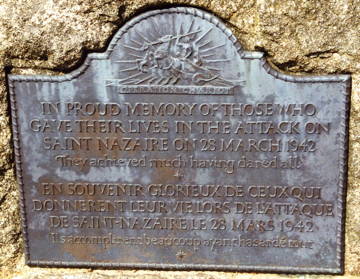 Memorial plate on the Operation Chariot Memorial, located near 409. The memorial is a menhir (monolith), resembling the megalith stones you can find all over Brittany. 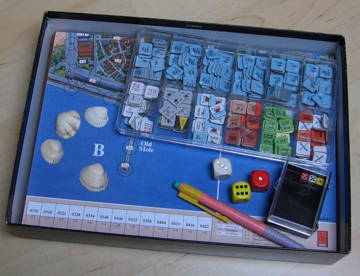 The shells in my game box come from the beach to the left of 408. It was a nice, though cool, day, and a few people actually were sunbathing there. 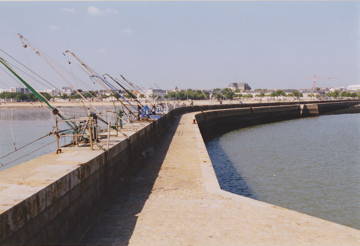 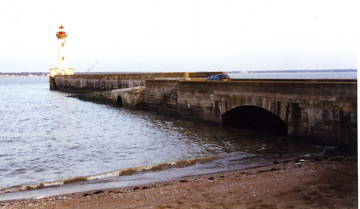 The old mole (342) seen from 344. Note the ramp that would have helped disembarking. The pillbox at 336, which caused so many casualties during the attempts to land troops at the old mole, is gone; it was placed in the middle of the mole, about where the ramp touches the water. 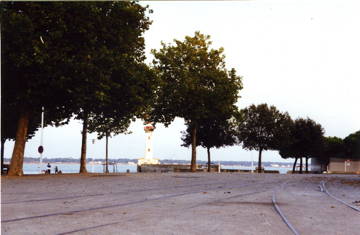 Railway tracks near the old mole, seen from 353 (which is a clear area now) towards the lighthouse on the old mole (342). Disused now, these could be the very tracks that are visible on the game board. 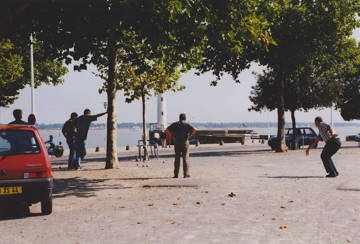 Frenchmen playing boule (or petanque?) on 344; the old mole lighthouse (342) is in the background. 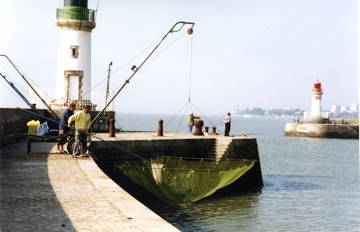 The east jetty lighthouse (311), seen from 301. The area between the jetties is called the avant port; it is tidal, and the quai is rising high out of the water at low tide. Only occasional steps on the inner side allow access to the quai from the water. 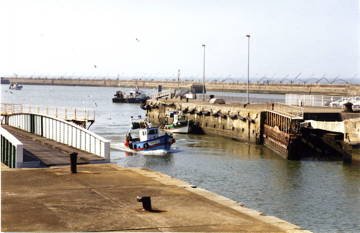 The outer lock gate of the new lock, seen from 323. Both the lock gate (313) and the swing bridge (321) are open, the latter is the structure with the white railing, visible to the left. The west jetty is in the background. 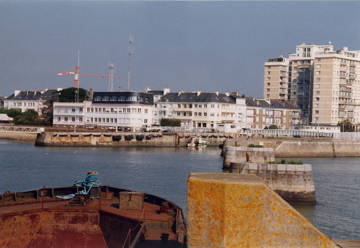 The entrance to the new lock (313) seen from 304. Note the row of concrete moorings ("dolphins") from the east jetty to the entrance; this row is visible on the game board.
Most of the houses visible in this and the other pictures have been built after the war. Saint-Nazaire was a prime target for allied bombers because of the strategic value of its port, in particular for U-boats. It was terribly damaged, about 85% of the buildings were destroyed or heavily damaged. The town was held as a fortress by the Germans right until the end of the war, it was only given up some days after the capitulation. The allied forces did not attempt to conquer it; its value for the German navy was lost anyway when the town was isolated from German-held territory. 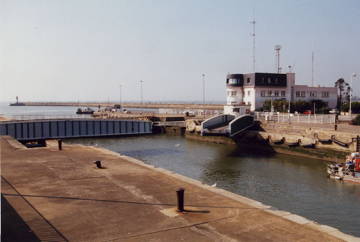 The closed outer gate of the new lock (313) with the swing bridge (321), seen from 323. Note the west jetty in the background. The swing bridge is caught in the middle of its movement. The building was the harbour master's office (capitainerie), but is a fire station today. 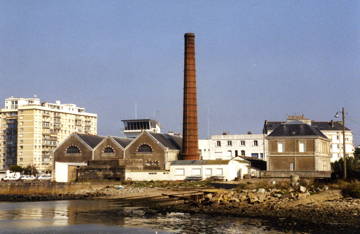 The power station (315, the building to the left of the chimney) and the "Santé Maritime" building (315, to the right of the image), seen from 305. The power station (usine electrique) was also a pumping station (usine elevatoire) for the big "new entrance" lock, needed because this is a tidal lock.
You could land a boat easily on that beach, but remember that this area was heavily defended– it was, and still is, the main entrance to the harbour. 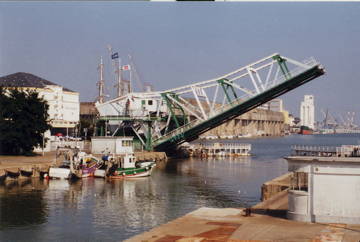 The "Bridge of Memories" (343), seen from 323 with the U-boat pens (441) and the inner lock gates of the new lock (343) in the background. This is a massive structure; it seems quite optimistic that the commandos planned to destroy it, having only such demolition charges available as they could carry. 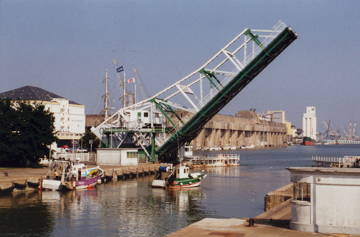 The "Bridge of Memories" again. The lock gate 331 is open and just visible to the right, left of the white building. 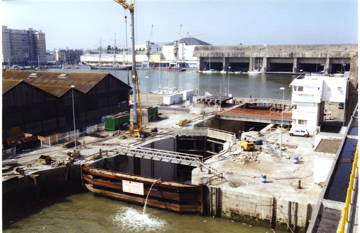 The old lock (211/212), seen from the roof of the sheltered U-boat lock (built later in the war on 202/201) towards 459 and the U-boat pens. The lock is sealed off for repair work (that must have been a very much delayed torpedo Wynn fired...).
The sheds to the left are similar to those that occupied much of the area at the time of the raid; at the place of the sheds visible here, however, would have been building 364, where Col. Newman established his temporary HQ.
To the left (362), outside of the picture, you find Saint-Nazaire's "ecomusée", a museum about town and coastal history. 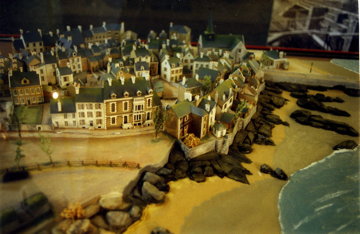 This picture shows a model of the old town from the ecomusée (area 325, approx), but as it looked at a time considerably before the war (end of the 19th century– there is a reason that the old mole is called "old", it existed at the time represented by the model and is just visible leading to right, out of the picture). The old town area was completely razed in the war and is now mostly covered with small, 1-storey houses and a few modern blocks. 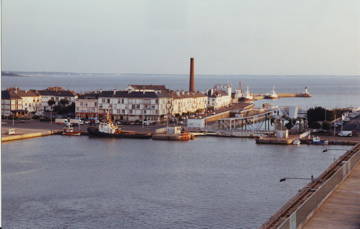 View from the roof of the U-boat pens (443) towards the avant port. The chimney belongs to the power station (315) in the old town; the tug is in game area 346 (which is a pair of tugs, sunk by Capt. Pritchard). Note the lowered bridge 343.
The U-boat pens proved indestructible after the war, in particular because the demolition attempt was made after some of the town had been repaired again; the authorities feared that blasting them would also do damage to the new town. So they did an about-face and decided to use them as they were: Inside the pens you find the tourist information office and an exhibition area now, as well as the probably safest berths for private sailing and motor yachts you will find anywhere on the planet. 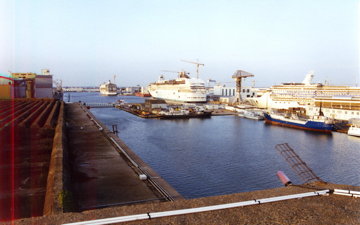 Another view from the roof of the U-boat pens (441), this time towards the Saint-Nazaire basin. You can see the swing bridge 261 across the channel that leads to the Penhouet Basin where the two cruise ships are berthed. The small black freighter is in area 235/236/241/242 (the harbour defence boats, in the game), and the blue ship would be near 223/224. The small white ship between them is in the position where two tugs were during the raid (243/244); it would be in one of these where Mickey Burn took shelter when the area was swamped with German troops; when they discovered him there, he was sent on a journey that ended in Colditz Castle where he spent the rest of the war. 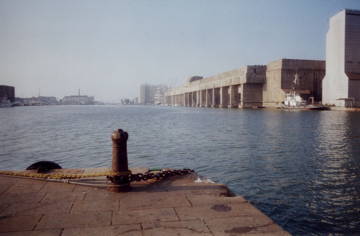 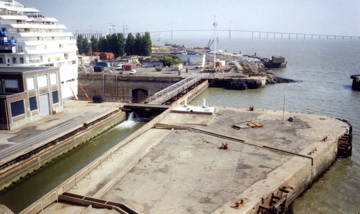 The southern caisson (111) with the retracting basin leading to the winding station (216). The re-built pump house (222) is visible to the left. Photo taken from roof of the sheltered U-boat lock built after the raid (in 202/201).
I crawled over the rocks and concrete blocks visible beyond the caisson to make the "stealth photo" you find further down this page.
In the background you see the Saint-Nazaire bridge spanning the Loire river. 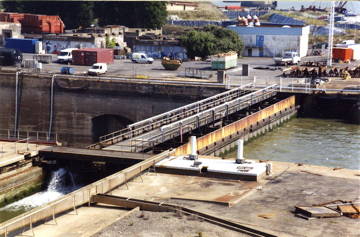 The southern caisson (111) in a closer view, with the camber for retracting the caisson leading to the winding station (216) just visible to the left. View from 202 towards 112. 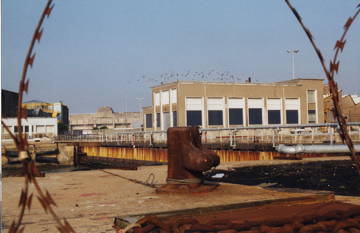 Stealth photo: The southern caisson (111) and the re-built pump house (222), seen from the tip of the peninsula (between 111 and 112). The dry dock is used again now for shipbuilding and repairs; the security guards would not allow me to go any nearer the caisson, so I had to improvise a bit. 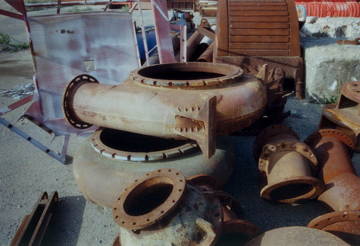 Impeller pump casings on a scrap iron heap near 112. The ones shown here are smaller than, but similar to, the pumps destroyed by Stuart Chant's team in the pump house 222.
The area east of the dock is still bristling with old concrete emplacements and bunkers, now used as storage rooms and workshops. You can also still recognize the former subterranean storage tanks, but the tanks are now above ground level. 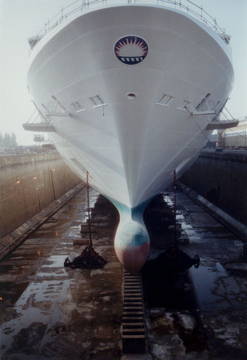 A cruise ship in the Normandie dock for an overhaul, seen from the northern caisson (256). 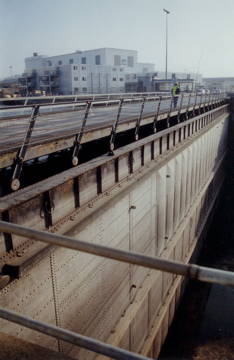 The northern caisson (256), seen from near 207. This is really a massive structure, 9 metres wide, and a 2-lane tarmacked road runs across it. Brett's team was supposed to destroy this monster with just the charges they carried on their backs! 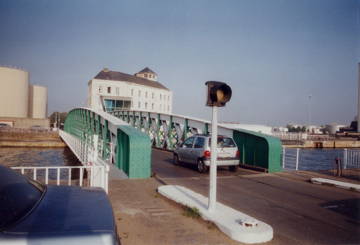 The northern swing bridge (261) seen from near 254. The structure in the background is the former Caserne des Douniers building to the right of 463. (Note: This building was demolished in 2005 and replaced with, well, actually nothing.) 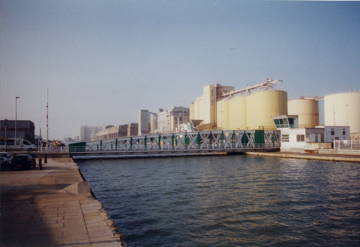 The northern swing bridge (261) seen from approx. 263. Again the U-boat pens in the background; all other structures in the area are new. The old railway station (Gare de Orleans, 445/446) has also vanished, with only a few parts of the facade of building 445 remaining (the new station is way off the map to the north-west). Some of the rails are still there, however. (Note: The former station buildings are now part of the new theatre that was finished in 2012.)

So this is the account of my walk around the place I have played over so often. It was impressive and moving.

May peace be with us all. Many of us live in quiet and peaceful surroundings; we should remember that this has been denied to our parents, grandparents and to many people living today.